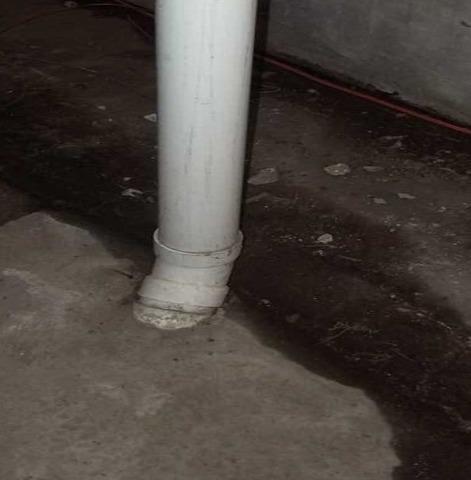 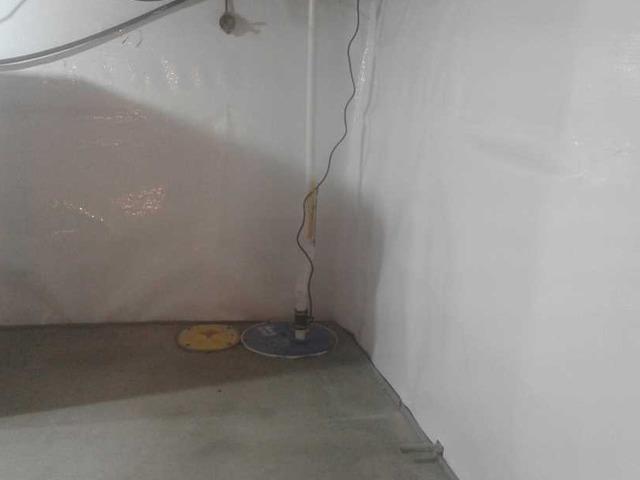 After experiencing dampness in their basement for some time, this Harrison, ME homeowner hired us at TC Hafford Basement Systems to solve their wet basement problem. To protect this space from moisture in the future, the existing slab was excavated from the basement to make room for a completely waterproof slab installation. With a freshly poured slab, our crew installed a Drainage Matting beneath the surface, along with a CleanSpace liner to wrap the walls of the basement. A SuperSump pump was also installed in the new floor, providing a means for any gathering moisture to be pumped out and away from the home. Now water leaking in through the walls or up from below the floor will be blocked by the new vapor barrier and redirected back out of the home through either the ground or the sump.

These basement upgrades will enable this homeowner to make use of their basement once again without the fear of water damage. The new vapor barrier will ensure their basement remains dry in the future! 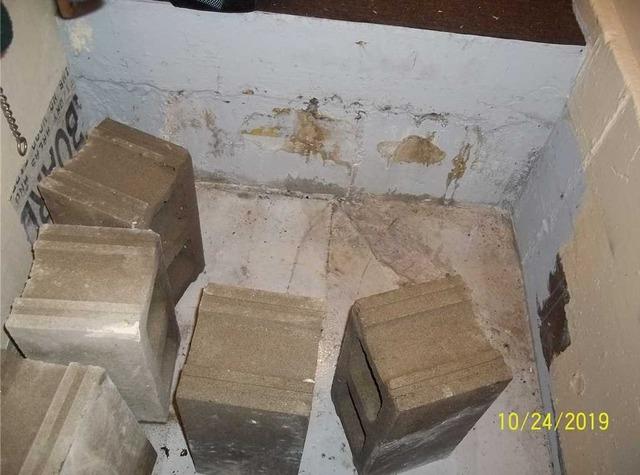 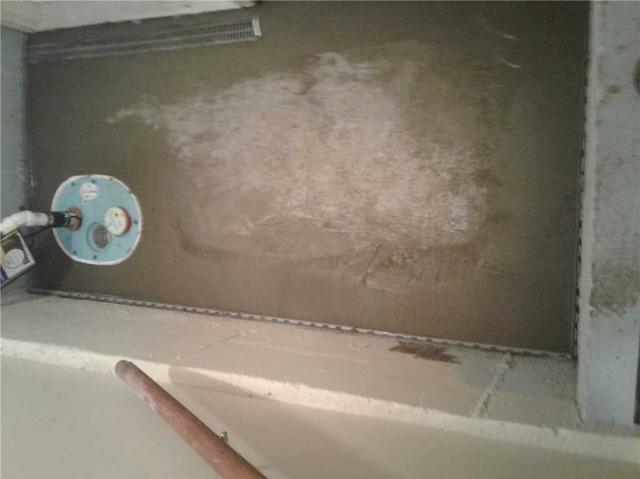 When this Cumberland, ME homeowner began to have moisture problems in their garage, they called us at TC Hafford Basement Systems to see if we could help. A door connected to their garage had been allowing rainwater to leak in and gather in the entryway. After they met with our representative, our installation crew was able to get started jackhammering out the old concrete floor of the entry space. Once clear, a fresh slab was poured within the space and WaterGuard piping was installed within the perimeter of the new floor. Running below the doorway, a TrenchDrain was used to capture any water leaking directly under the door in the future. The grate on the top of the TrenchDrain rests level with the floor, allowing any water to spill right in. Finally, a SuperSump system was installed to receive any captured water and remove it from the home through a discharge line.

This homeowner can now be sure any water that would have previously entered this space will be removed from the home without pooling up on their floor. The WaterGuard piping & SuperSump pump will keep this entryway water-free for the foreseeable future! 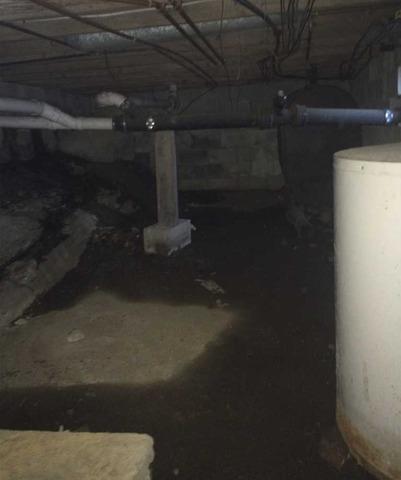 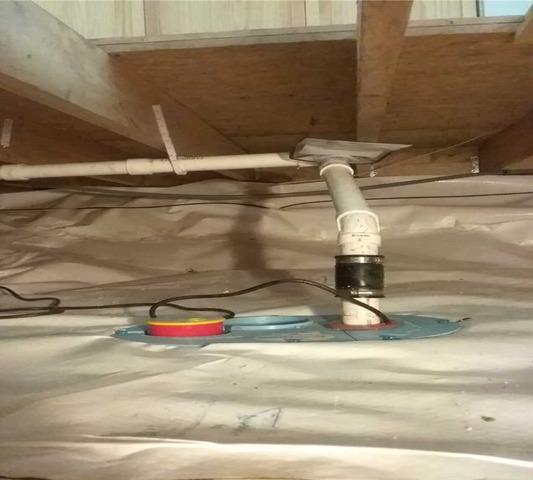 Looking for a way to keep any and all moisture out of the space below their home, this Bailey Island, ME homeowner called us at TC Hafford Basement Systems to see just what we could do for them. After receiving their free estimate, they gave our crew the go-ahead to begin work on the permanent solution they were looking for. First, in order to create a vapor barrier over the exposed earth, a Drainage Matting was laid across the floor and a CleanSpace liner was utilized to encapsulate the entire interior of the crawlspace. This vapor barrier will block any future moisture leaking into the space before it can reach the interior of the crawlspace. This blocked water will flow through channels built into the bottom of the Drainage Matting to where it can most easily drain back into the ground without causing more problems for the homeowner. In order to expediate the water-removal, a TripleSafe sump pump was installed in the floor of the space as well. This device contains three separate pumps each working to keep this crawlspace dry year-round. The while the primary and secondary pumps work using power from the home, the third pump operates on a backup battery to ensure even during storms harsh enough to knock out power, the water-removal process continues.

These waterproofing measures will ensure this homeowner won’t need to suffer from any side effects of moisture build-up in their crawlspace in the future. The vapor barrier & TripleSafe installations will ensure this space remains dry & healthy for years to come! 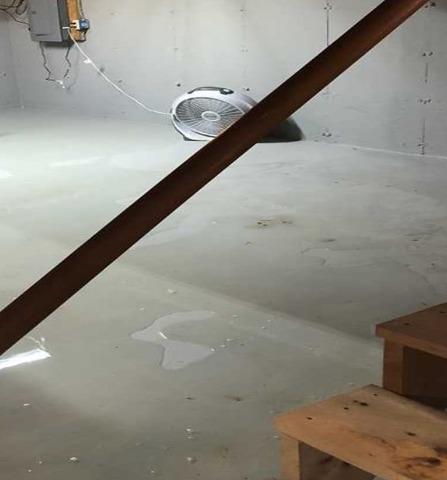 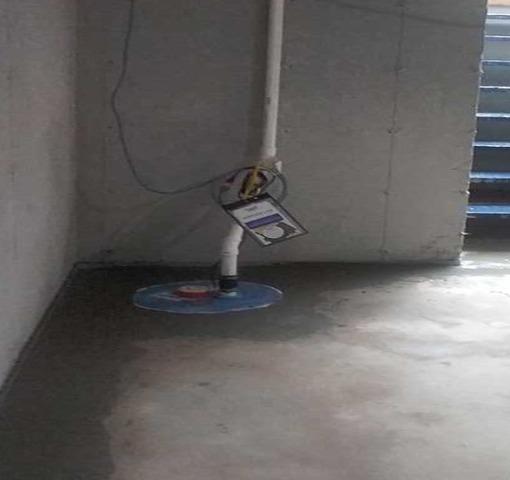 With water constantly flooding into their basement during rainfall, this homeowner was looking to have their basement waterproofed as soon as possible. After receiving a free estimate from our sales representative, they hired us at TC Hafford Basement Systems to get the job done! The perimeter of the basement floor was excavated to make room for WaterGuard piping to be buried surrounding the basement. This new piping system will act as a low-pressure pocket to attract any leaking moisture before it reaches the surface of the floor from below the home. This trapped water is guided through the WaterGuard to the SuperSump pump freshly installed in the floor. Once in the sump, any water is forced from the home through a PVC discharge line protected by an IceGuard pipe segment on the exterior of the home.

With these systems implemented successfully and working together, this Mechanic Falls, ME home is now fully waterproofed. Now any leaking moisture will be pumped from the home before any accumulation occurs on the basement floor.

Old Failing Sump in Freeport, ME Replaced with SuperSump Upgrade 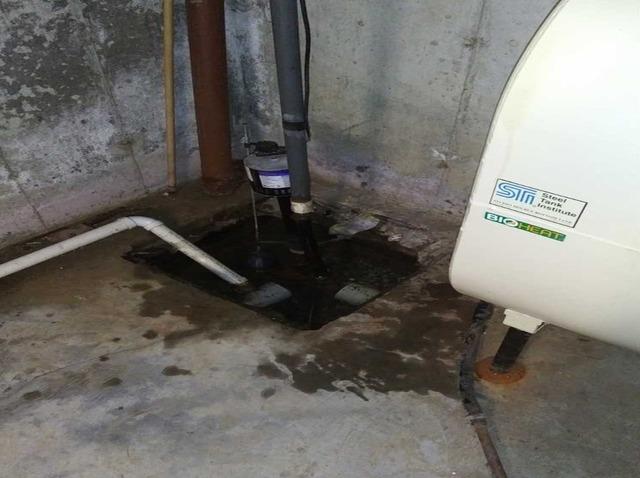 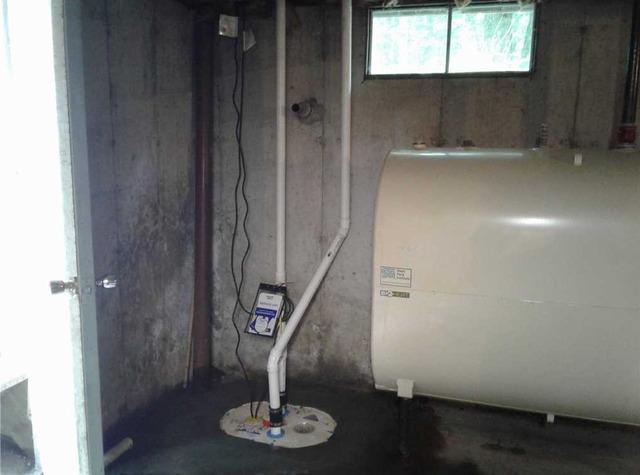 Living with an old sump, this Freeport, ME homeowner thought it was time they replaced it with a more powerful pump. Shortly after they contacted us at TC Hafford Basement Systems, our sales representative met with the homeowner to go over their options and give them a free estimate. The homeowner soon gave us the green light to begin work on upgrading their old sump! As soon as our installation crew made it out to the home, they began by removing the old pump and digging out the sump to make room for the larger SuperSump. With the SuperSump installed, any water leaking into the basement in the future will be forced out of the home through the PVC discharge line. Outside the home, an IceGuard pipe section along with a LawnScape discharge port were attached to this line. The IceGuard provides protection against ice or other blockages in the line by allowing any trapped water angled holes to escape through before it can reach the basement again to cause flooding. The LawnScape port on the end of the line provides a grate to hold back leaves or other debris that could block the line over time.

With these upgrades in place below their home, this homeowner can now rely on their sump to handle water removal without needing to manually assist. The new SuperSump pump will keep this basement water-free for the future!